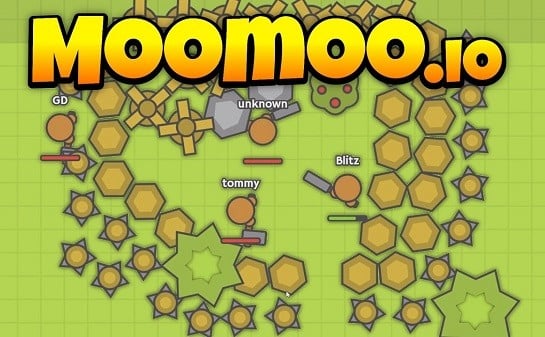 
The basic idea of moomoo.io is to collect materials like food, wood and stone. You do this by attacking bushes, trees and rocks with your weapon. As you do so, your little character wields his axe and rewards you with an apple, for example. Once you have collected enough materials, you can start to build fortifications anywhere you like. Ideally, you place them in locations that block other players from attacking you while you harvest more goods.

To gain points in moomoo.io game you can do two things and herein lies the genius of the game. Firstly, you can attack other players, killing them rewards you with points. Secondly, you can fortify an area and build windmills. Over time the windmills give you points. As you can see, there are two paths here. One is designed for aggressive players that would rather fight or don’t have the patents to grind away. The other is tailored to more passive players that would rather build a fort and ward off intruders as they harvest points with windmills. Obviously, there will be players that see the benefits of securing an area and using windmills, whilst they kill other players, thus maximizing their point earning.

More Info:
You can play Moomoo.io unblocked on our Cool Math Games website. If you enjoyed playing it, you should take a look at our similar games Gotia.io